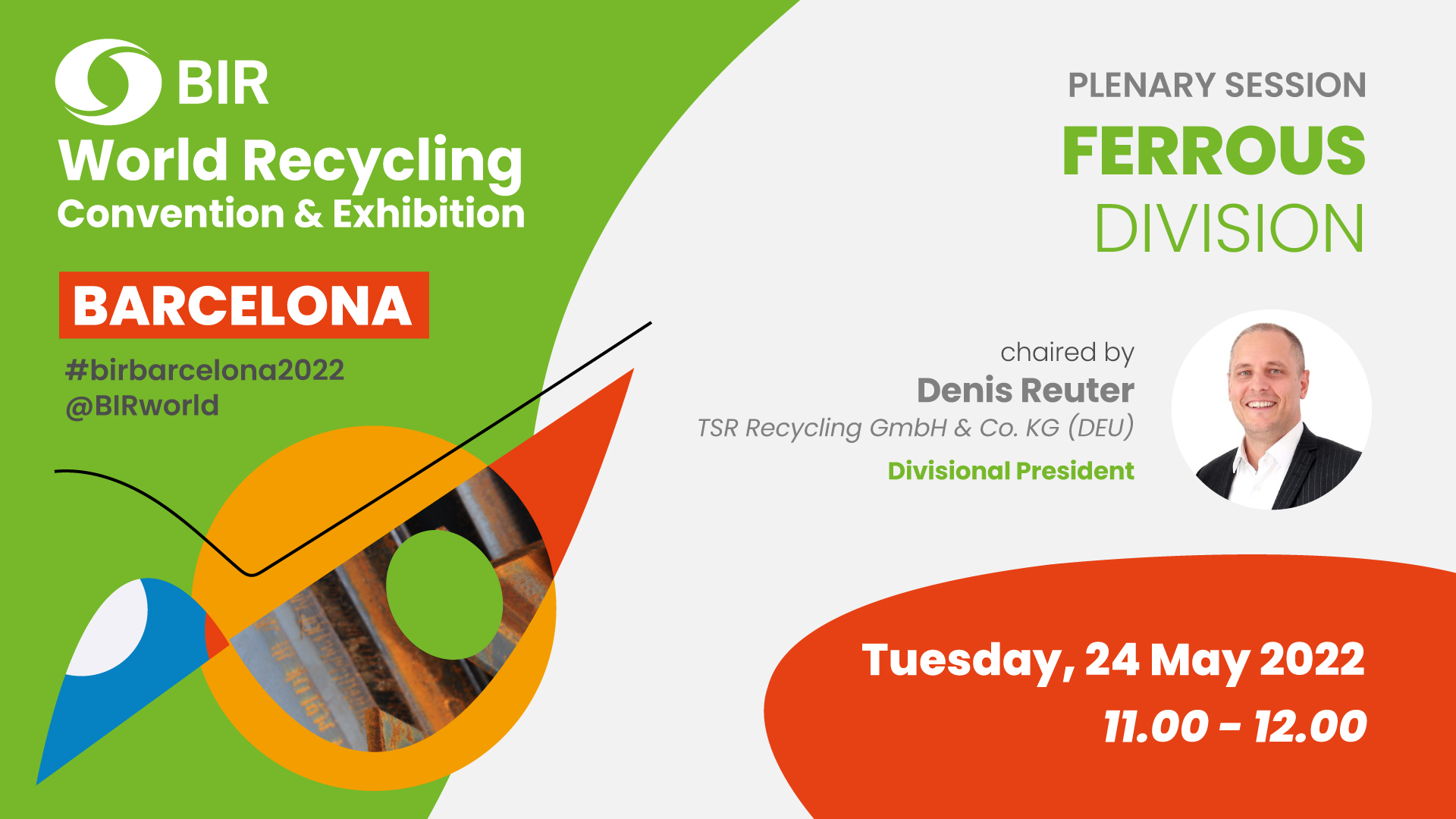 Steelmakers across Europe would be requiring increased quantities of scrap in their attempts to reduce the carbon footprint of their operations, stated Eric Niedziela, Chairman of ArcelorMittal France and Vice President Climate Action at ArcelorMittal Europe, in his guest speech at the BIR Ferrous Division meeting in Barcelona on May 24.

In a presentation entitled “ArcelorMittal: Smarter steels for people and planet”, Mr Niedziela outlined the group’s strategy for achieving a 25% reduction in its CO2 emissions intensity by 2030, including a goal of 35% for Europe. As part of its leadership role in the steel industry’s decarbonization push, for example, ArcelorMittal was planning to have the world’s first full-scale zero-emissions steel plant by 2025 at Sestao in Spain.

Among the many measures designed to achieve its targets, the group envisaged “a huge increase in our scrap demand” and so was looking to secure its raw material supply via “acquisitions, long-term contracts, joint ventures or whatever we can discuss together”. While supporting decarbonization, BIR President Tom Bird insisted that the steel industry should not look to achieve its goals “at the expense of free trade in scrap”. If scrap exports were seriously compromised, he said, “recycling rates go down” and “no investment takes place within our industry”, thus negatively impacting the steel sector too.

While Mr Niedziela questioned the validity of exporting scrap to countries which would then compete on the European steel market with more carbon-intensive products, he acknowledged: “I’m not saying we should stop the market. We have to manage this properly in Europe.”

According to fellow guest speaker Cinzia Vezzosi, Immediate Past President of the European Recycling Industries’ Confederation, stopping free trade out of Europe through the proposed revision of the EU’s Waste Shipment Regulation would leave almost 20 million tonnes of steel scrap looking for a new home. This would “break the Circular Economy chain” in Europe and lead to lower collection rates. “Shutting down this flow will create a massive earthquake in the market,” she warned.

Ms Vezzosi pointed to scope for greater use of steel scrap within Europe given that its usage rate of 57.6% in 2021 was well below, for example, the 69.2% achieved in the USA. However, she went on to insist, business conducted between Europe’s scrap suppliers and consumers needed to be “absolutely fair” and “linked to international prices”.

Ahead of summarizing some of the key points of the 13th edition of “World Steel Recycling in Figures”, BIR Statistics Advisor Rolf Willeke confirmed that this long-standing and hugely well-received publication had been given a new subtitle - “A raw material for green steelmaking” - to highlight the environmental importance of steel scrap use. Most recent data indicated that steel scrap recycling annually prevented nearly 950 million tonnes of CO2 emissions which would have come from producing steel using virgin raw materials.

The Ferrous Division meeting in Barcelona was moderated by its new President, Denis Reuter of TSR Recycling GmbH & Co. KG in Germany. He welcomed the opportunity to see everyone in person after the hiatus created by the COVID pandemic.