Keynote announcement! Lucy Hawking speaks on "Cosmic sustainability: the Universe is a recycler!"

“Cosmic sustainability: the Universe is a recycler!” 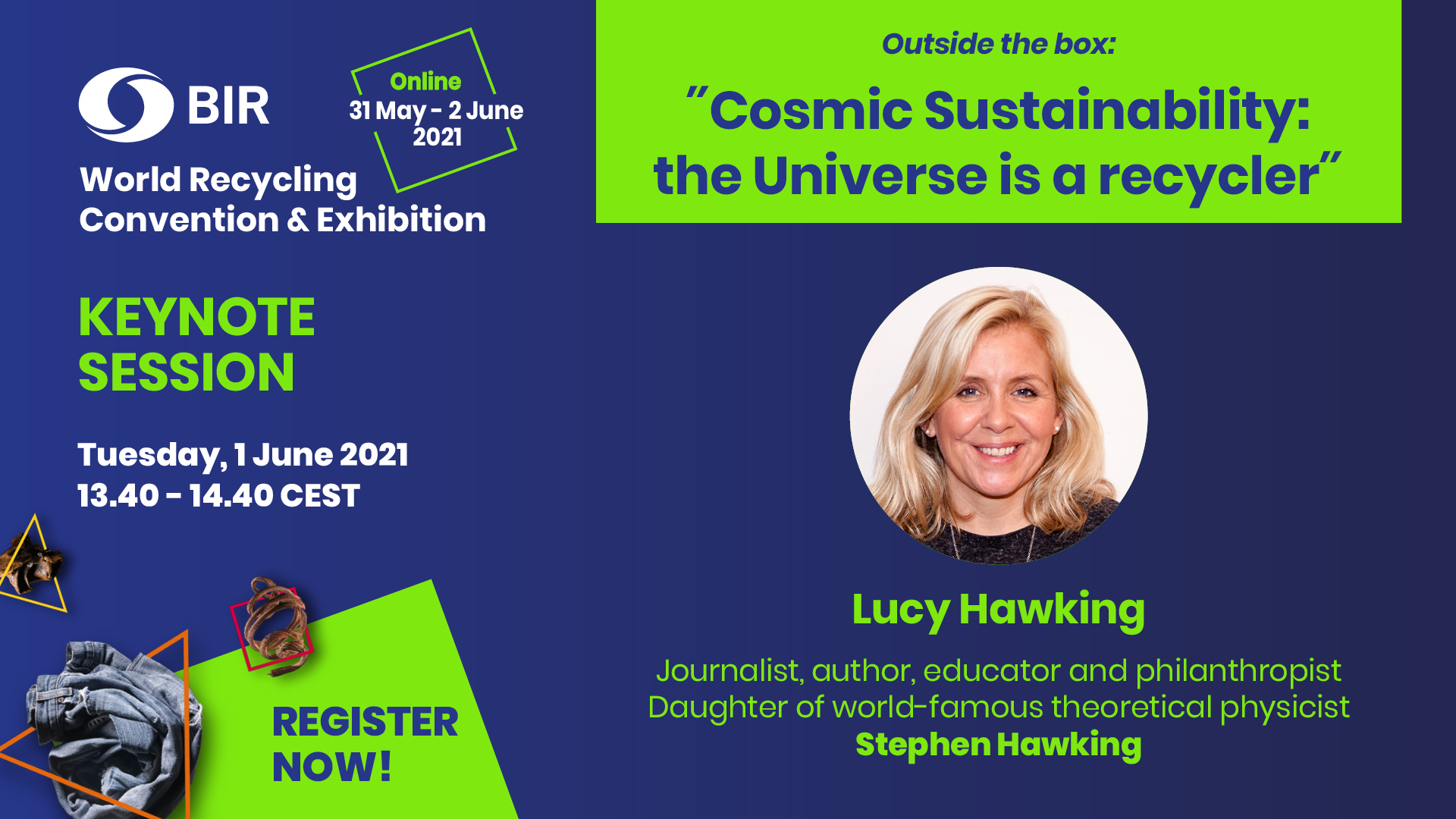 BIR is proud to announce that we have secured our main speaker for your keynote address: Lucy Hawking, the daughter of the world-famous theoretical physicist Stephen Hawking.

In her keynote address, Lucy will shed light on the universal law of cosmic sustainability as discovered by her father: nothing is lost, only transformed. She will touch upon her father’s life and work and how they ended up working together to write a series of books for kids, which includes an explanation of how the universe began and how stars form - leading to the remarkable conclusion that we are all formed from the recycled products of stars.

Lucy Hawking is an English journalist, novelist, educator and philanthropist, and her main objective is to make science accessible and entertaining. She is famous for her ‘George’ book series of fantasy adventure novels for children based on real science.  Written in collaboration with world-leading scientists including her father, the George series is published in over 40 languages, including Zulu and Xhosa. The final book of the series, ‘Unlocking the Universe’, a compilation of the science content from the whole series with some outstanding new essays added, was published in January 2020 and has been a #one best seller.

As well as editing the text for her father’s final book, Brief Answers to the Big Questions, Lucy wrote the Afterword for the posthumous book and recorded the audio version for Audible and Radio 4. Lucy has also made documentaries for BBC Radio 4 about the impact of technology on different aspects of human life. She is currently working on a series of podcasts for Audible about the future of the human race in space. In 2008, Lucy won the Sappio Prize for Popularizing Science and in 2015, the UNSW medal for Outstanding Science Communication. In July 2015, Lucy was awarded an honorary doctorate in science by Queen Mary University London for her work in STEM education. In 2017, Lucy was a judge on the Royal Society’s Young Science Book of the year and is a regular judge for the Breakthrough Junior Challenge in Palo Alto, USA.

With the Guardian Media Group, Lucy made a virtual reality film, The Party, about an autistic teenage girl. The Party was nominated for an award in the ‘social impact’ category at the annual VR awards 2018 and received huge critical acclaim for its realistic and authentic depiction of the life of a teenage girl with autism.

Lucy is currently working with Atlantic Productions on a virtual reality experience based on black hole theory as well as a new book series for young readers. In 2020, Lucy wrote and presented a highly well received series of podcasts for Audible, 'Lucy in the Sky', a look at the future of human space travel. In 2021, Lucy led a project at the Stephen Hawking Foundation in collaboration with the Vaccine Confidence Project at the London School of Tropical Medicine and Hygiene and QMUL to produce free to download resources for teachers to support discussion around vaccines in the classroom. This project has been very well reviewed by users and is the result of intense collaboration and investigation not just of the scientific source material but also of the way in which a young audience relates to the subject of vaccines and how they access information about issues around science and society. Lucy is the Chairperson of the Stephen Hawking Foundation.

BIR is providing a powerful digital platform which offers sponsors and exhibitors excellent visibility and easy tools to interact directly with attendees. Contact us at bir@bir.org.