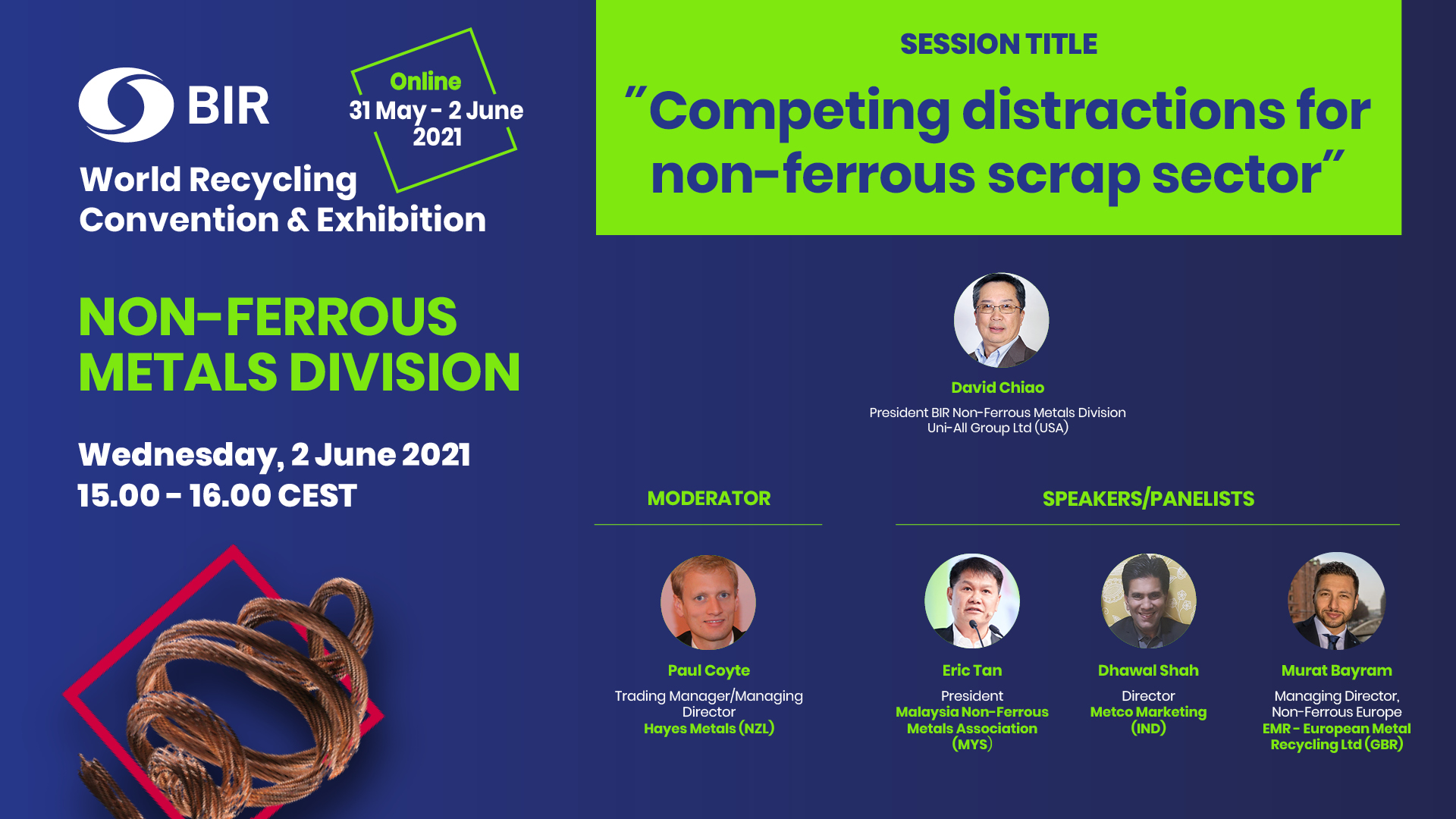 Once again, potential threats to the transboundary movement of scrap fell under the spotlight at today’s online meeting of the BIR Non-Ferrous Metals Division, hosted by its President David Chiao of Uni-All Group Ltd and featuring a panel discussion moderated by Paul Coyte of Hayes Metals in New Zealand.

As well as setting minimums for metal content and maximums for other materials that would rule out many current imports, the draft guidelines also called for pre- and post-shipment inspections - a level of control that was not even required by the Basel Convention for hazardous wastes, Mr Tan pointed out. “We do not know why there is a need to have both inspections,” he stated.

The MNMA was continuing to negotiate with the authorities over this proposed tightening of import controls and remained hopeful of a positive outcome, according to Mr Tan. His organization’s aim, he said, was to achieve a level playing field and prevent Malaysia from being put at a disadvantage to other countries in South East Asia. Under the proposed changes, he explained, Malaysia’s non-ferrous industry would be required to fund, for example, increased inspection costs and the potentially higher processing costs of overseas suppliers.

According to Mr Coyte, the rewriting of specifications by individual countries “just complicates things”. Globally-respected specs had already been established and materials “should move freely on that basis”, he said.

Also on the theme of transboundary shipments, Murat Bayram of European Metal Recycling spoke of increasing moves within Europe towards stemming outward flows of the recycling industry’s materials. “Export restrictions, if put into place, would result in nothing short of the collapse of the current, strong ‘green’ recycling infrastructure that relies on unhampered access to end markets all over the world,” he warned. “If we really want to push recycling around the world, exports were, are and will stay important.” The Circular Economy did not stop at the European border, he added.

Mr Bayram also argued that improved eco-design would lead to “winning back more resources in the recycling process”.

Despite a shortage of good-quality scrap in India, the country’s government still found this trade to be “in some way undesirable”, lamented Dhawal Shah of Metco Marketing. Scrap imports were of enormous benefit to India on a number of levels, including environmentally, and so “it is time we changed the narrative”, he contended.

Mr Shah had earlier expressed deep sorrow at the COVID pandemic’s devastating recent impact on India. However, he added, the country was still expected to record economic growth of between 8.5% and 9.5% in the current financial year, driven by pent-up demand and infrastructure projects over the next four to five years with a combined value of around US$ 1.4 trillion. This would make the country “a hotbed for consumption”, according to Mr Shah.

At the same time, India’s new vehicle scrappage programme had the potential to make the country’s automotive industry “grow by leaps and bounds”, he concluded.