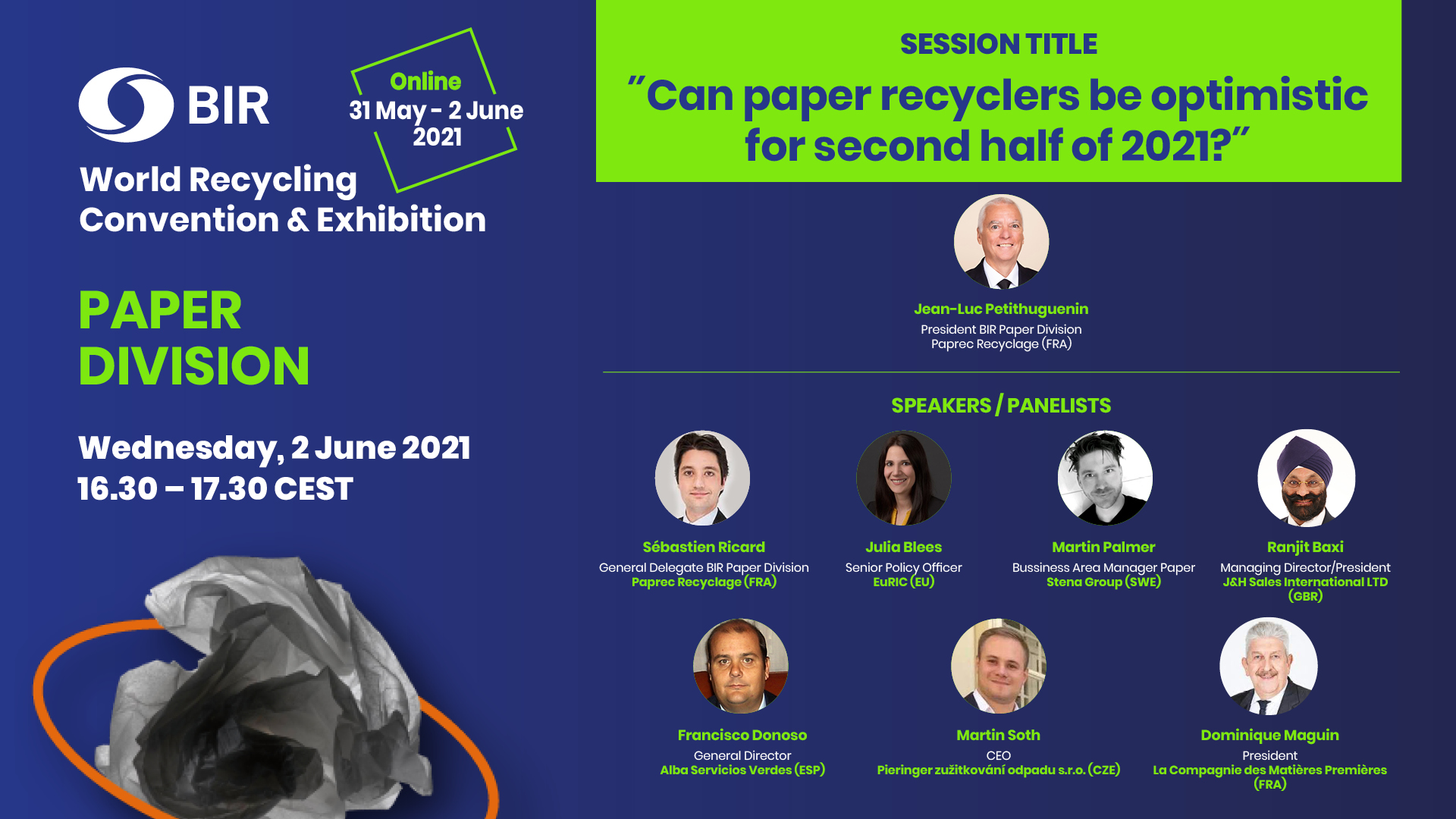 Severe restrictions on recovered paper exports from Europe to the rest of the world would be “a very big mistake”, warned BIR Paper Division President Jean-Luc Petithuguenin of France-based Paprec in his introductory comments to yesterday’s online meeting. And his view was backed by Dominique Maguin, BIR Past President and Co-Founder of the European Recycling Industries’ Confederation (EuRIC), who argued that tighter export restrictions would be “counter-productive”.

According to EuRIC’s Senior Policy Officer Julia Blees, the European Commission “knows how important recycling is to reach all their goals” relating to a circular economy and climate neutrality. However, the Commission was also intent on seeking a revision of waste shipment regulations that would not only streamline intra-EU movements but also restrict exports beyond Europe, with its draft proposal expected to be published by early autumn this year.

Europe’s surplus of recovered fibre was currently at 7 to 8 million tonnes per year and so exports were “really, really crucial for our industry”, said Ms Blees. The Commission’s proposals allowed for overseas shipments to continue if exporters were able to prove that receiving facilities in other countries were operating under “broadly equivalent conditions” to those in Europe regarding environmental protection and human health. One way this could be achieved, she ventured, was through third-party auditing.

Ms Blees also identified harmonized end-of-waste status for recovered paper as a way forward. “Bearing in mind that several European countries have already enacted it or are in the process of enacting it, it would very much make sense to have a European end-of-waste for the recovered paper sector,” she stated. Mr Maguin also underlined the importance of pursuing end-of-waste status and of removing the “waste” tag from recycling industry products as these carried a value and were destined for use as raw materials.

During a panel discussion moderated by Paprec’s Sébastien Ricard, the need for Europe-wide harmonization not only of end-of-waste status but also of legal procedures and of quality was emphasized by Francisco Donoso of ALBA Servicios Verdes in Spain. BIR Past President Ranjit Singh Baxi of UK-based J&H Sales International agreed that there were significant differences in collection systems throughout Europe and that harmonization of streams was required to help achieve a standardized product for exportation.

Banning or heavily restricting exports would have cost implications for Europe and could even make it cheaper to import paper from Asia. “A lot of new markets are coming up and we need to move our recovered paper to those markets,” he added. “So don’t make international trade or exports more complicated by unnecessary regulation.”

Commenting on current market conditions, Mr Baxi observed that freight costs had risen by a factor of three or four over the last 18 months, thus making business “very, very difficult”. Both he and Martin Šoth of Pieringer believed the current market was abnormal but was likely to become more settled during the course of 2022.