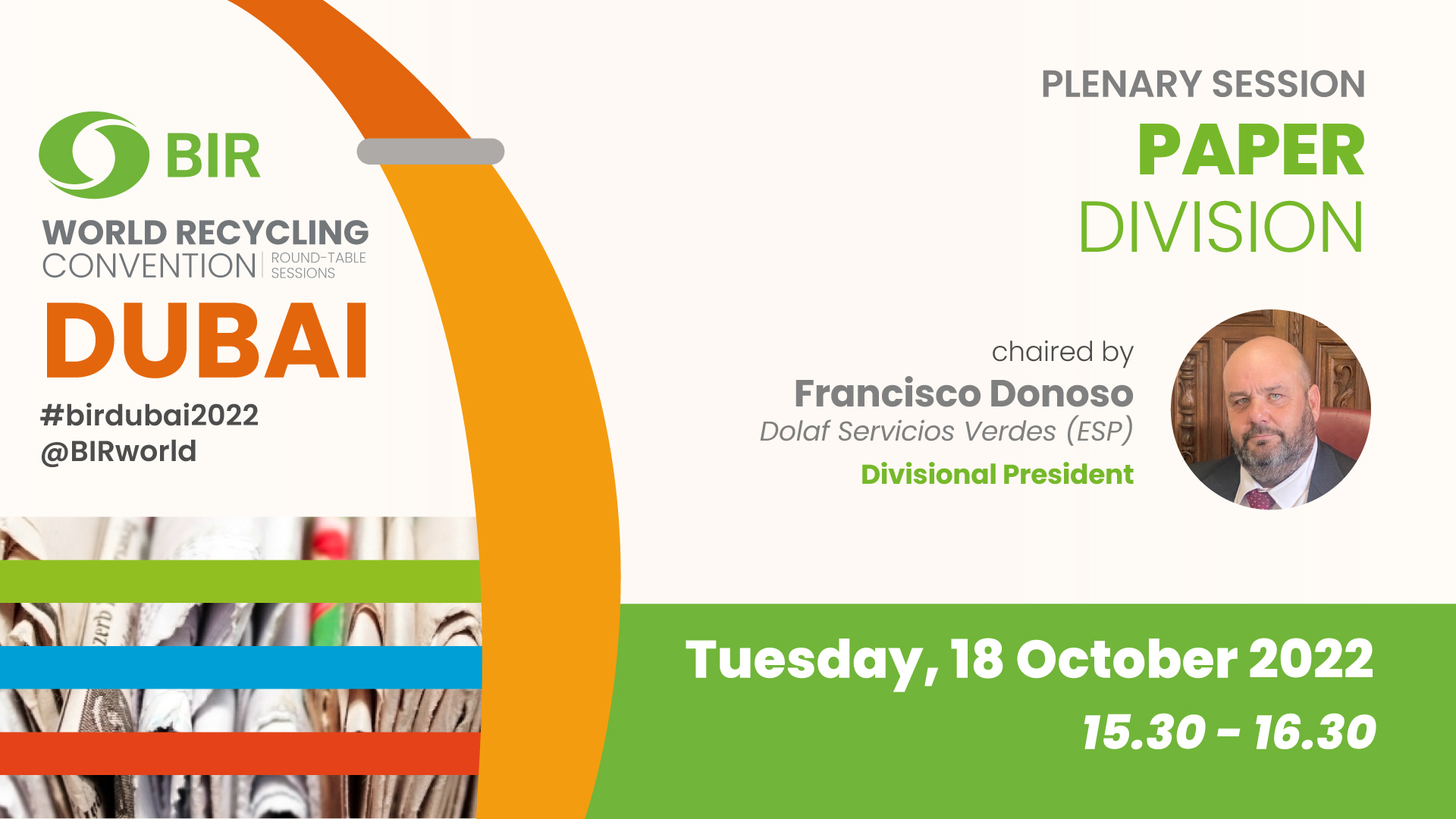 The implications of high energy prices were raised during several sessions at the BIR World Recycling Convention in Dubai but it was during the Paper Division plenary session on 18 October that the issue dominated proceedings.

The tone was set immediately by Division President Francisco Donoso, of Dolaf Servicios Verdes S.L. of Spain in his opening address. Mr Donoso said prices for OCC had fallen by between 80% and 90% in recent months, amid extremely low demand all around the world with high stocks at paper mills. “The high cost of energy - and specifically gas - is one of the reasons for this as it has become by far the largest production cost for mills. They cannot pass on this cost in their sales prices because demand for their products is also low owing to the financial crisis, and neither can they reduce their energy costs. Therefore, the only cost they can manage is what they pay for their raw material.” In the USA, Mr Donoso said, prices for mixed paper had reached zero dollars in some locations and thousands of tonnes were being landfilled. Prices had fallen fastest in Europe and he anticipated further downtime, suggesting “it is difficult to know where the bottom is”.

The Indian position was set out by Nishant Sahney, Managing Director, Gaurav Vipa Papers Pvt Ltd in the UEA who said the high prices of more than six months ago had fallen away dramatically. “We don’t have exports to China anymore because the Chinese are not buying pulp. On top of that, because of less demand in US and Europe, we are now competing with manufacturers from the Middle East and other Asian countries. Mills in India are now running at 70% capacity so that is why they cannot afford the prices of six months ago.”

Ranjit Baxi, President of the Global Recycling Foundation, was more upbeat, saying the paper sector had always proved to be resilient. “Ours is a very strong industry and we always come out stronger, even through Covid. It’s the expertise and commitment of our people that makes it work. Demand for paper is not falling - it will still be there. “It’s time we supported new countries elsewhere – in the GCC or countries in Africa which could be the next manufacturing hub. Let’s not be upset by the price fluctuation; market demand will be strong, so let’s be positive.”

Mr Sahney’s own presentation considered the Indian market which imported seven million tonnes of secondary fibre in 2021, 40% of which came from the USA, 25% from Europe and 22% from the Middle East with Sri Lanka, Australia and Africa making up the balance.Consumerism was on the rise, he said, and with 65% of Indians below the age of 35, this was a big opportunity for the paper industry. Another was Swachh Bharat Abhiyan, a domestic programme in India to increase collections and reduce the reliance on imports. However, Nr Sahney noted, China had invested hugely in Vietnam and Malaysia in recent years to cater for its domestic market, hitting demand for Indian products and creating a supply-demand gap. “This is the question: did China invest because they could or because they should? We will know the answer soon. Add to that the energy crisis in Europe and no real container demand in the US because of fears of recession and we see the reason for the freefall in recovered paper prices across the board.”

In another presentation, Atul Kaul, Director Pulp & Paper, Waraq in Saudi Arabia considered the recovered paper market in the kingdom and his company’s activity. In 1996, production required 85% virgin paper but it had now swung round to using 85% recycled paper. In 1995, 80% of recovered fibre was exported with the rest being landfilled. This year, 90% of recovered fibre is being consumed by local mills.