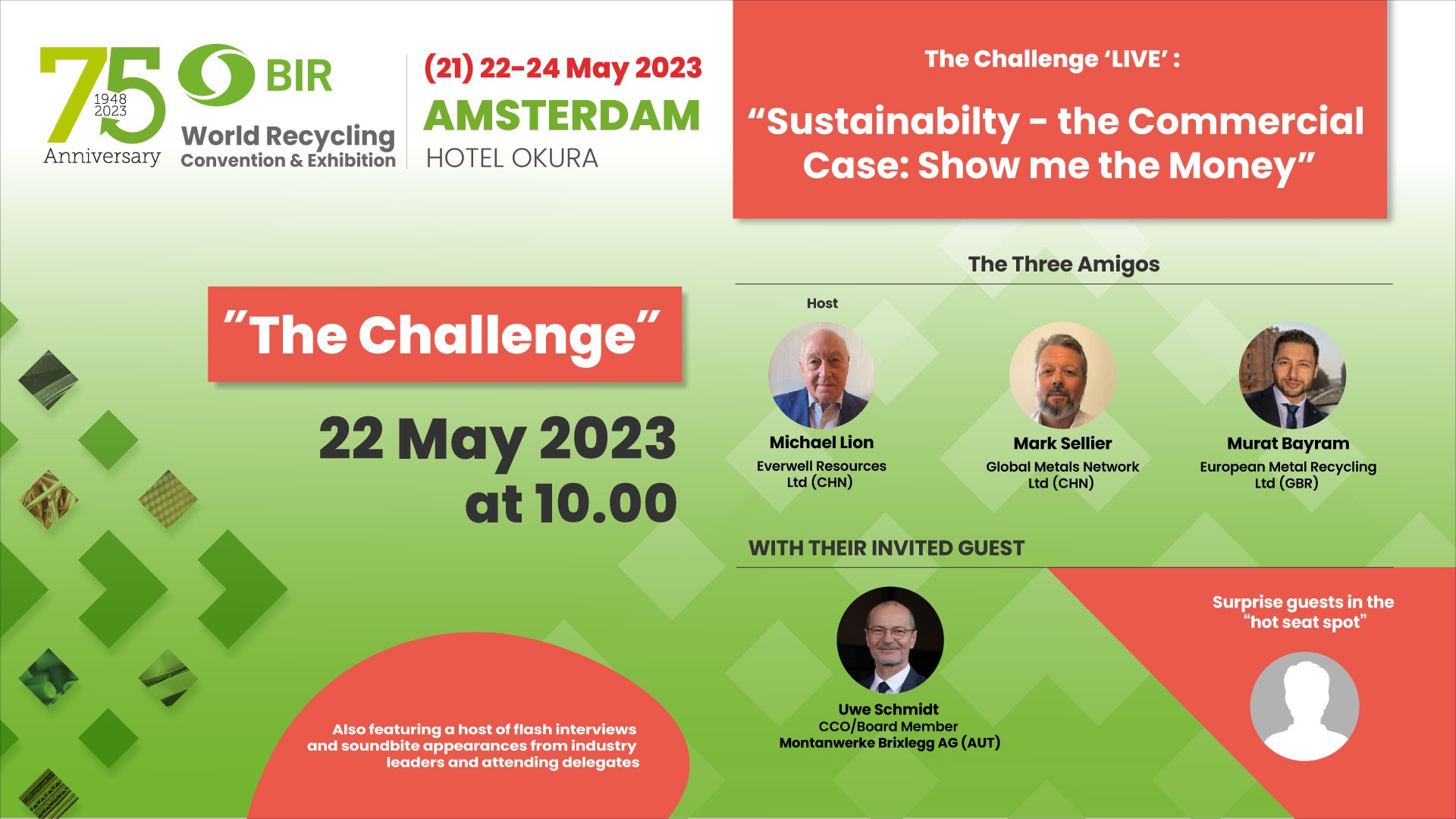 by Michael Lion, ITC Chairman and host of The Challenge

Immediately following the official opening of the BIR World Recycling Convention in “Dazzling Dubai” by President Tom Bird, the event kicked off with the launching of the latest signature edition of BIR’s much acclaimed TV chat-show formula conversation “The Challenge”. The Three Amigos, the show’s resident host Michael Lion (Chair of the International Trade Council) and resident co- anchors Mark Sellier and Murat Bayram were once again in sparkling, informative and entertaining form, grappling in the prequel to being joined by their featured guest with a range of topically ticklish issues currently confronting BIR members and the wider recycling world.

Leading off on several themes with his own takes to open up the conversations on selected topics, host Lion emphasized that raising the various demanding concerns served not to suggest negativity, but to address thoughts and possible solutions to inspire the creative and resilient nature of the global recycling industry facing the whole gamut of cross-commodity sectors that the show’s plenary session addresses.

Murat Bayram provided an impassioned and highly articulate exposé of the industry’s determination to advocate its position and response to the much misguided and counter-intuitive proposed regulations and controls currently being considered by the EU authorities, as Mr Lion noted a troubling trend in many regions to adopt regulations that was both moving trade from its healthy globalized condition to one of a narrow and damaging regionalization for the recycling sector.

Turning to the evolving spectre of rising interest rates and the energy crisis so presciently predicted by “The Challenge” in its February edition, according to Mr Lion this was undoubtedly then, but even more now, a major concern. Mark Sellier adroitly expanded upon citing both cash flow and cost anxieties this situation must increasingly exacerbate, and The Amigos’ conversation additionally focused on the added ongoing impact that the LME nickel crisis had imposed on the sector’s risk management hedging needs.

The show then turned to its main feature, the introduction of their star guest Chris Sheppard, CEO of leading global recycler EMR, who as Mr Lion noted in his introduction was indeed a beacon of the exemplary twin virtues of combining major commercial and ESG achievements that so underscores the immense value recyclers provide in advancing the best aspects of the Green and Circular economy and the vanguard of constructive sustainability.

What a fascinating, thoughtful, and inspirational peroration Mr Sheppard provided to a packed audience through his numerous insightful comments and conversation with The Three Amigos!

Mr Sheppard’s initial remarks identified that in many instances outside players had hijacked the true role and value of ESG and his observations set the tone and detail for his extrapolation of his fascinating ideas and approaches. He specifically identified the crucial recipe of the strategic combination of profitable approaches that also facilitates environmentally progressive practices as his guiding principle.

In the conversation encompassing a diverse range of issues that his leadership of EMR incorporates, including work/life balance, accessibility in leadership of a global enterprise, managing growth, and regional versus global trends in today’s recycling context, Chris Sheppard held both the Amigos in the exchange of ideas and the audience, which was both live and virtual through the unique simultaneous broadcast of the session via the BIR website, in absolute thrall – and for those who may have missed part or all of this edition a view or review is available through the free-to-air recording of the edition on the BIR website.

At the conclusion of the completely compelling featured guest spot, this marquee live edition as a now well established and highly popular feature culminated with The Challenge’s “Guest Hot Seat” quick takes.

First up in these individual quick takes in discussion with host Lion was the newly appointed Chair of the Ambassadors Committee, Susie Burrage who expressed both appreciation and excitement in taking on this key BIR role, while paying tribute to the many years of dedicated service by her predecessor Salam Sharif.

At Mr Lion’s encouragement next in The Hot Seat was BIR’s own Michele Noukam Kwandjeu, who as the federation’s Communications and Social Media Manager is providing an ever-increasing BIR messaging content and advocacy medium to optimize recognition of the vital role of recyclers as she so eloquently explained.

And with the final hot seat guest, a truly wow factor mightily impressed the audience as Mr Lion introduced a sneaky peak preview trailer of the stunning upcoming docu-series “Repurposed” along with the show’s host and producer, the ever creative and engaging John Sacco, President and CEO of Sierra International.

As Mr Lion noted, this series promises to be one of the most impactful, tour de force works of advocacy messaging on behalf of the recycling industry ever produced. Mr Sacco explained that the show brings to all, from Captains of Industry to the general public, an appreciation that from planes, trains and automobiles and way beyond, be it airports, highways and almost every form of infrastructure as well as reforestation et al, the raw materials content in the ever-recurring cycle is our own crucial recycled input that dominates as the enabler. As Messrs Lion, Sellier and Bayram enthused, the anticipation of this forthcoming unique series is palpable given its both informative and entertaining formula – with Mr Lion adding that John Sacco’s unstinting commitment and vision was very much to be recognized and highly applauded.

President Tom Bird returned to The Hot Seat for the show’s wrap with Michael Lion’s closing comments and thanks to our guests for another memorable show, which surely provided a fitting launch of the sensational dazzling Dubai Convention. The Challenge returns again soon when the Three Amigos will bring yet more novel guests and topics to the global recycling world.